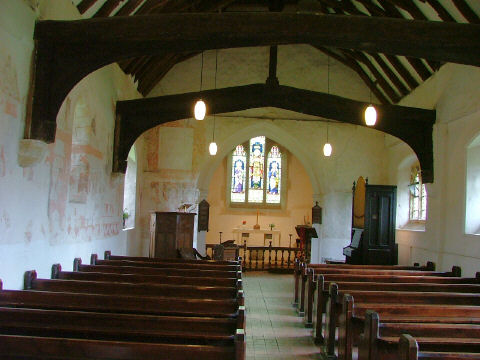 A Norman church, much rebuilt in the seventeenth century following a storm, and again in the early twentieth century. A twelfth-century window survives in the north wall of the nave, but most of the windows are later. The altar rails are good examples of the seventeenth century whilst the Royal Arms of George II are dated 1739. Most people remember this church for its wall paintings which were rediscovered under layers of whitewash in 1927. These have been dated to the mid-thirteenth century and were painted in two tiers along the north nave wall. If the south wall had not been rebuilt in the later Middle Ages that too might have yielded further murals. Those that survive cover a variety of scenes including a good Entry into Jerusalem, Cain and Abel and the Last Supper. The paintings were restored by Professor Tristram, but luckily he concentrated on conservation of what survived and repainted very little. There are also some later murals to either side of the chancel arch. The church is now cared for by The Churches Conservation Trust.