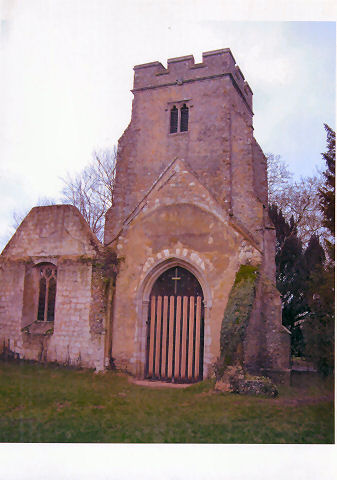 One of the few ruined churches in the county, St Mary's stands in a well-kept churchyard on the edge of Eastwell Park Lake. Only the west tower is intact and shows in its lower stage one of the unusual inset flint crosses probably inserted during the construction of the building to mark the day of the patronal festival. To the south of the tower is a nineteenth-century chapel built to house the romantic monument to Lady Winchelsea, which can now be seen in the Victoria & Albert Museum. A stone table in the churchyard marks the burial place of Richard Plantagenet, the illegitimate son of Richard III, who is reputed to have lived in the house which still stands to the east. His burial is recorded in the church register of December 1550. The church was built almost entirely of chalk blocks which, following the construction of the lake in 1841, started to soak up water which eventually resulted in the total collapse of the church in 1951. The ruins are now maintained by the Friends of Friendless Churches, a national charity, both as a place of pilgrimage and a historic monument.