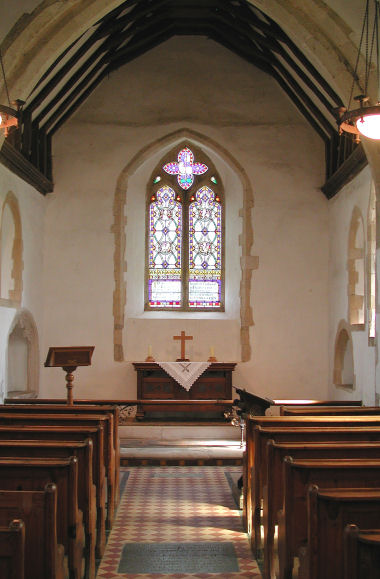 Goodnestone was never the centre of a large population. Court and Church stood on slightly rising ground above the marshes of the River Swale, adjacent to the wealthier parish of Graveney whose church grew to outshine this `poor relation`. Today Goodnestone`s lack of prestige in the medieval period is cause for celebration as its simple two cell Norman construction is largely unaltered, other than for some enlarged windows and rebuilt chancel arch. The staircase that formerly lead to the Rood Loft remains in the north wall although this goes almost unnoticed as the visitor's eye is drawn to the simple Decorated window in the east wall. This is filled with stained glass produced by one of the most famous early nineteenth century practitioners in the newly rediscovered art, Thomas Willement. He lived just outside Faversham and many local churches have examples of his work. This is one of his better designs where scale, colour and technique combine to make something that is eminently suitable for its location. Nave, chancel, north porch, west belfry.