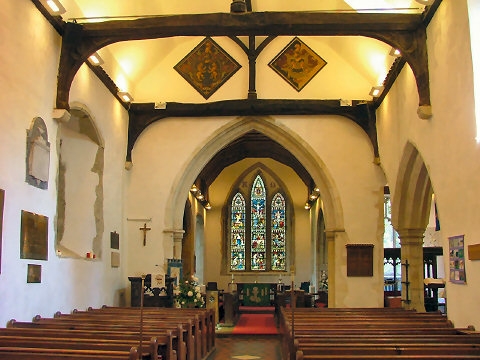 A lovely, lively, church still in rural surroundings but on the edge of Ashford. Thirteenth century in origin, but enlarged in the period around the Black Death, it comprises nave, chancel, south chapel and diminutive south aisle. The latter is very much a botched job with an awkward joint between it and the slightly earlier chapel. Was this due to a lack of skilled craftsmen after the Black Death, I wonder? Two north windows have glass by Kempe. One is signed in the conventional way with a wheatsheaf in the bottom corner. The second is also signed but in an odd position – the capitals in the design are made of wheatsheafs. Kempe was awfully inventive when he wanted to be. There is a lovely rustic medieval chest and two nice hatchments over the chancel arch. On top of the tower screen are the medieval doors of the rood loft made into shutters, whilst the excellent east window is a good example of the work of Clayton and Bell. Set in a well kept churchyard, and little known, this really is a gem of a place.