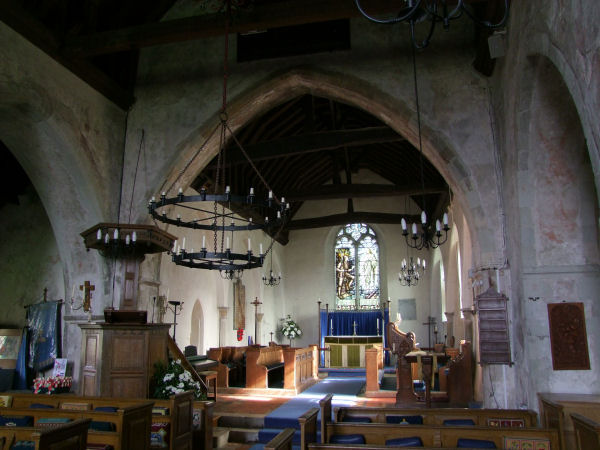 Here is a church which really shows its Saxon origins, the south chancel wall displaying the tell-tale herringbone masonry executed in part in salvaged Roman tile. The chancel arch and north and south arcades date from the thirteenth century and are simple cut-throughs, with plain piers between. The chancel has internal wall arcading with Bethersden marble shafts. Above the chancel arch hangs a George III Royal Arms while below it can be seen the notches where the rood beam was originally supported. The metal font - of twelfth-century date - is of cast lead with a king and an angel on each of its ten sides. It was discovered in 1921 hidden under plaster. There are the remains of some unclear fourteenth-century wall paintings and a very interesting piece of graffiti - a Persian beast with the head of a man, body of a lion, mane of quills and sting of a scorpion! This can be found on the south nave arcade.