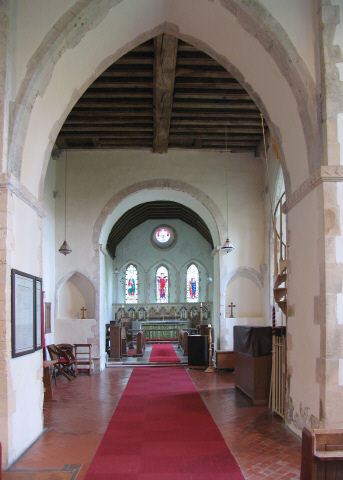 Standing next to the medieval castle on the top of a steep slope, the long and rather forbidding church has a unique atmosphere. From the north all appears to be of the thirteenth century, but the sheer mass of the tower gives away the Norman origins of the building. The church is entered through the north aisle. Inside, there are blocked Norman arches on the west face of the tower which indicate that it was originally an outer wall. The thirteenth-century arch which cuts between nave and tower contrasts well with the twelfth-century arch between nave and chancel. There is a good collection of stained glass; particularly appealing is the window which shows St Elizabeth of Hungary, and the east window of 1950 by J.E. Nuttgens.