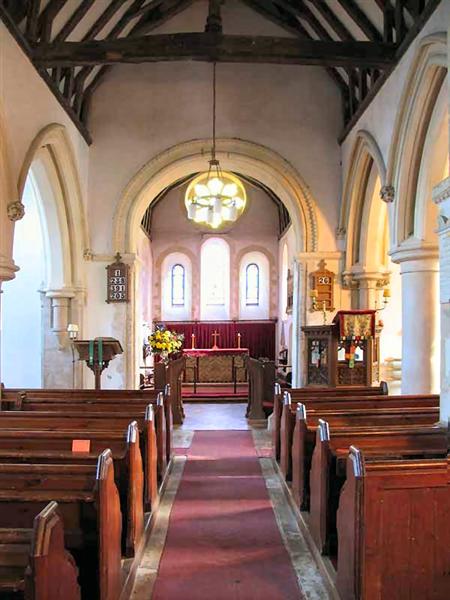 A charming village church with a greater number of interesting furnishings than is usual in this part of the county. There are twelfth-century window openings in the chancel, whilst a lavish south doorway tells of an extremely wealthy medieval church. Next to it are the remains of eight mass dials - which must be a record! Inside the south, or Bifrons, chapel is separated from the aisle by a screen and steps and there is a plain hagioscope to the chancel. Many mural tablets catch the eye and tell of the long association with the village of the Conyngham family. However, it is the stained glass which really deserves our attention at Patrixbourne. Set among very basic nineteenth-century glass are many panels of seventeenth-century Swiss origin, including scenes of the Garden of Gethsemane, St Elizabeth of Hungary and the Raising of Lazarus. With the exception of Temple Ewell. this is the largest collection of pictorial Swiss glass in a Kent church. By way of contrast, the north aisle displays an excellent twentieth-century window by G.C. Abbs.