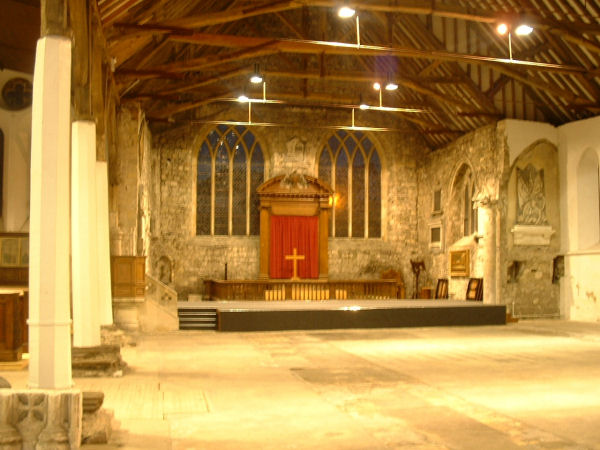 An extraordinary barn of a church - one of two in the town cared for by The Churches Conservation Trust. That it was a large Norman church is without question - see the responds at the west end of the nave. Like the other two churches in Sandwich, St Mary's probably also had a central tower, the collapse of which (like St Peter's) caused havoc to the building. Rebuilding here took a rather rare form with the building losing its south arcade; having a new north arcade built of wood; and a new roof to cover the whole! By the 20th century the church was surplus to requirements and was threatened with demolition. However local supporters, encouraged by the doyen of ecclesiologists, Ivor Bulmer-Thomas, saved it. Now used for concerts it is open to visitors and has much of interest. In the north aisle are 18th century pews saved from Gopsall Hall in Leicestershire. The chancel contains a rare banner stave locker for the poles used to carry banners in medieval street processions. Nearby is an example of two pieces of stone being joined together with a dowel made from animal bone. The glass in the east window is scratched with the names of the glaziers who have repaired it on numerous occasions!