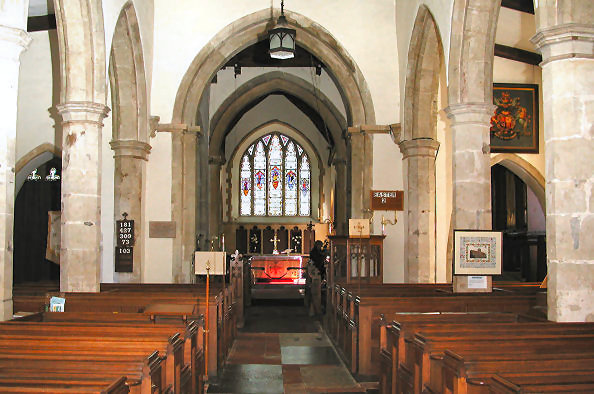 Set on a hilltop among orchards, Selling has more in the way of furnishings of interest than most churches in the area. The east window has glass from about 1300 which shows St John, St Mary Magdalene, the Blessed Virgin Mary and St Margaret of Antioch. The figures are set into a grisaille pattern with heraldic shields below which show the Arms of Edward I, Queen Eleanor of Castile and Queen Margaret of France. The glass may have been moved about in the nineteenth century, but it was so well done that the joins do not show. In the south chapel hang two flags flown at the Battle of Trafalgar in 1805. There are Royal Arms of Queen Victoria and several good nineteenth-century memorial tablets. The west window, which represents the Resurrection, was designed by Willement in 1850. He lived at nearby Faversham. A window in the north aisle by A.E. Buss (1970) shows the Benedicte and includes a picture of Selling church whilst another window, by Powells, includes symbols of the Australian sugar industry!