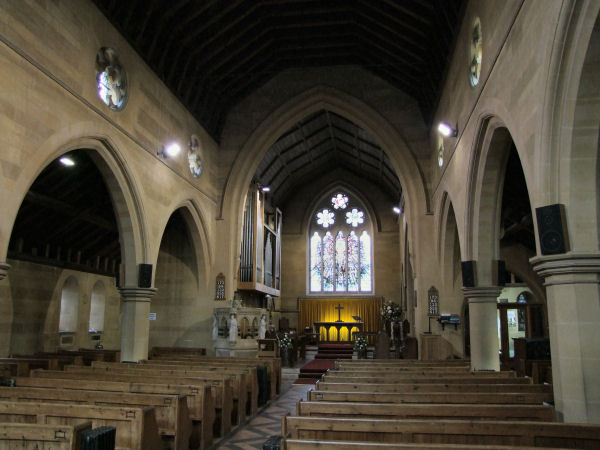 Westgate on Sea was an upmarket, planned resort, of the second half of the nineteenth century. Many of its buildings were designed by Charles Nightingale Beazley (see also Acol and Birchington) including both churches. This was the first church here, to be followed ten years later by St Saviour’s (see separate entry). It really is a lovely design of warm sandstone with a solid clerestory with windows punched through in a refined plate-tracery style. Most dramatic. At the back of the church is a Royal Arms of George III, obviously brought from somewhere else as it is a hundred years earlier than the church. Some original stained glass survives – for example the figure of St James in the south aisle and probably by Alexander Gibbs – but war damage destroyed much. Therefore the great East window contains glass by Francis Spear of 1960. Judged as one of his finest works it depicts the `Spread of the Spirit` from Europe to Africa and Asia. It demands very close inspection for the backgrounds are fascinating containing, as they do, the wildlife of the specific regions. Look out for elephants, tigers etc! There are also two fine 1920s windows in the south chapel now converted to a useful meeting room. Unlike many churches with an evangelical tradition, the building here is much loved and respected and with a lively congregation it is hoped that this will continue for many years to come.