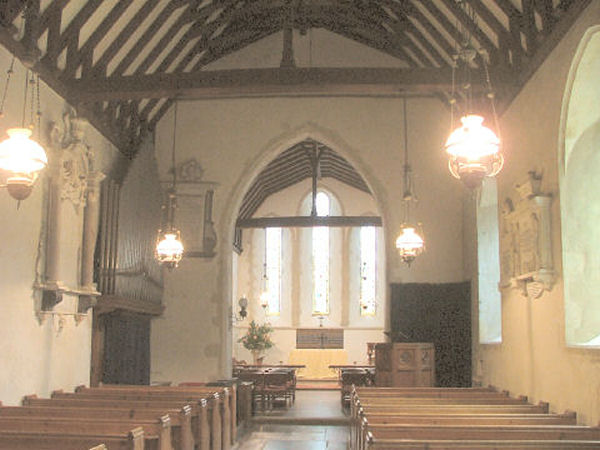 Coming into Womenswold is almost like visiting a miniature village. Houses hem in the church and the view from the approach road is completely filled by flint wall. The church is mostly thirteenth century - full of lancets - but remodelled in the late medieval period and again by the Victorians. The nave north wall has no windows and displays three impressive memorials including one by Sir Robert Taylor. In the chancel are two tomb recesses - the north one still has its original thirteenth century coffin lid with Lombardic script whilst the southern one was messed about with in the nineteenth century when its coffin lid was moved a few feet to the west and hidden under the choir stalls. It has recently been uncovered again. Behind the altar is a lovely tin inscription plate whilst below it is some nineteenth century stencilling that would have looked good through the legs of the altar. The sedilia and piscina have all been recut by the Victorians. The pulpit hangs over its stone bases almost like the prow of a ship whilst the font has a row of very lively encaustic tiles around its base. All in all a lovely and well cared for church.