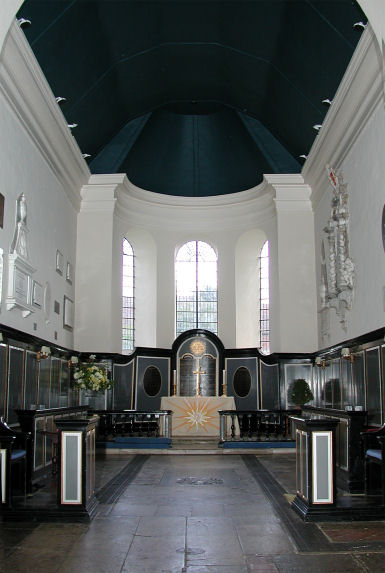 A very strange church, the result of the collapse of a tall central tower in 1686. The nave of the medieval church survives almost intact, while the chancel has been constructed from the remains of the central crossing of the thirteenth-century church, and a new tower built. The nave is tall and light, and contrasts well with the short narrow apsed chancel that now contains mural tablets to the Sawbridge and Drax families who lived at Olantigh. The reredos is plain early eighteenth-century work and ties in nicely with the dark oak panelling. The choir stalls which stand in the nave were a thanksgiving memorial for the life of President Kennedy. The west window, which represents Christ in Majesty, is set into plain glass and was designed by Gerald Smith in the 1950s. It is an object lesson in how good glass of this period could be.