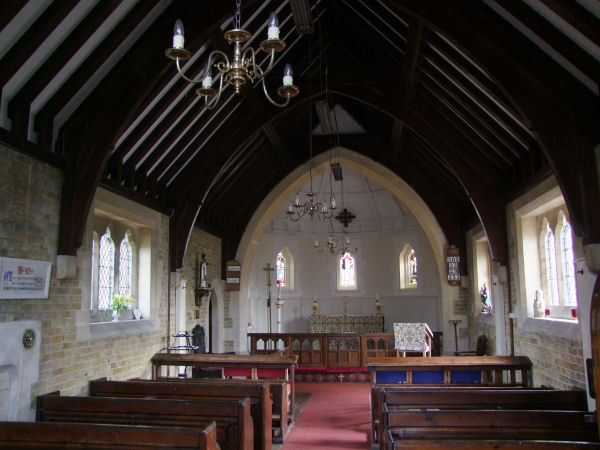 An absolute gem of a church, this miniature House of God has more atmosphere than many of our grand set pieces. Standing on the edge of the rolling Thanet farmland and at the edge of its tiny village, St Mildred’s church was built as both a place of worship and a school – hence the huge fireplace opposite the main door! Built in 1879 by Charles Nightingale Beazley the ubiquitous church-builder and restorer of Thanet. The exterior is of flint rubble and the diminutive size of the church is increased due to it being cut into the ground on the south side. Dedicated to the area’s own seventh century saint, Mildred, a picture of her dominates the simple interior whose other statues confirm a devout congregation. There is no chancel arch, the sanctuary being defined by a tiny apse containing three rather good windows. Depicting Our Lady, the Crucifixion and St John the Evangelist they are by the little known firm of Gibbs and Howard of Charlotte Street. I especially like the housewifely depiction of Our Lady and the tiny frog and mushrooms at her feet! Long may this charming church serve its community.