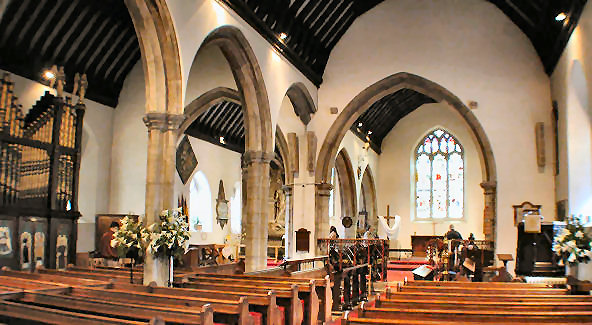 Aylesford`s massive church dominates this part of the Medway Valley. Its Norman tower (probably the castellum mentioned in Domesday) is now attached to twin fifteenth century naves which in turn open into twin fourteenth century chancels. The abiding atmosphere is that of a thoroughly `scraped` building which was the result of three Victorian restorations - but it is no less interesting for that. All the glass is Victorian, much by Burlisson and Grylls, with a few by Powell, including an eccentric east window in the north chancel showing the dates of the succession of each Earl of Aylesford whose memory it commemorates. The large monument in the north east corner is to Sir John Banks, eighteenth century entrepreneur and philanthropist whose descendant is the present Earl of Aylesford. The twentieth century actress, Dame Sybil Thorndike, was the Vicar's daughter and she was married in this church in December 1908. Keyholder nearby West tower, nave, chancel, north aisle, north chapel, south porch