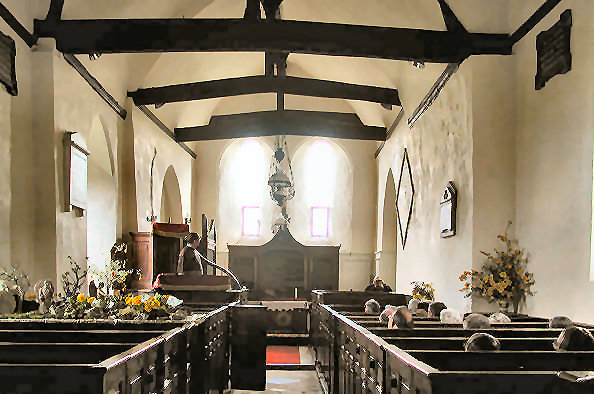 The land between the North Downs and the north Kent marshes was once wealthy through agriculture and country estates grew as hubs of thriving communities. One such was Badlesmere which gave its name to a family whose peak of power occurred in the early fourteenth century. Their fall was almost as quick as their rise, the family falling foul of political intrigues in the reign of Edward II. They would have known the tiny church of St Leonard, although its character is now an unusual hybrid of medieval woodwork, box pews from the time of Jane Austen and stained glass of the present time. There is fine Royal Arms of George I and a hatchment to the First Earl Sondes. By far the most important furnishings are the medieval bench ends to be found in the chancel. One shows the frequently illustrated carving of the Trinity, represented by a triangle. The two west windows by Frederick W. Cole represent St Francis of Assisi and The Sower. Apart from that the church is very simple - just nave and chancel, and so beautifully cared for that it is obviously a building which excites great passion. Indeed it should do, for as the north Kent corridor gets ever covered with concrete, it is little pockets like this bring us closer to our ancestors.