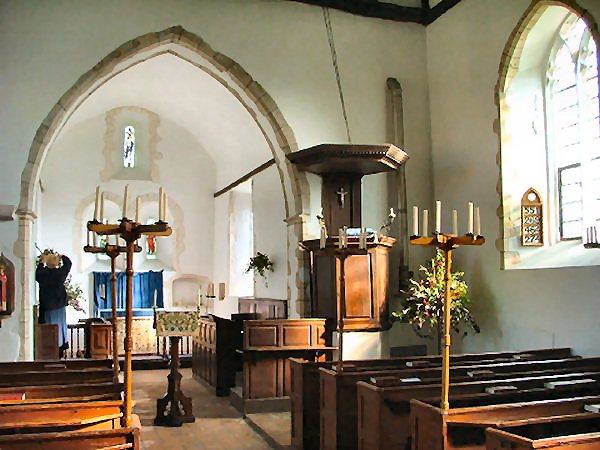 Rumwold was a seventh-century saint about whom very little is known, and there are only eight churches dedicated to him in England. Bonnington is a small two-cell church of great charm which stands on the banks of the Royal Military Canal. The building is of fourteenth-century appearance which resulted from a major reconstruction of a Saxo-Norman original. The east wall contains three Norman windows. There is no difference between floor level in nave and chancel, which creates a homely and less mysterious feel. On the north side of the chancel arch is a small image niche, above which is a bracket which would have supported the rood beam. On the south side is an enormous pulpit with a large sounding board, whilst over the chancel arch is a large Royal Arms of George III dated 1774. The north-west window contains fragments of medieval glass, including three little heads, whilst the small bell turret is supported at the west end of the church by an enormous wooden construction.

All information contained on this website is the intellectual property of John Vigar © 2023.