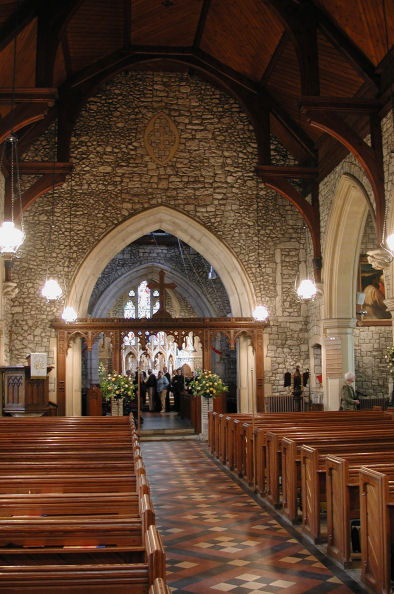 A church whose interior does not quite deliver all its picturesque exterior promises. The situation on the end of the sandstone ridge with far-ranging views is wonderful - and the lychgate is one of the oldest in the county, probably dating from the fifteenth century. Inside the results of a serious fire in 1832 and subsequent rebuildings are all too obvious. The plaster has been stripped from the walls and the rubble stonework disastrously repointed, whilst the poor quality mid-nineteenth-century glass installed by Hardman's studio is not typical of the usual high quality of that firm's output. However, the stone and alabaster reredos is just the right scale for the chancel, and compliments the medieval aumbry, piscina and sedilia. There is also a good range of eighteenth- and nineteenth-century memorials including a large piece at the west end by Scheemakers to commemorate Sir Christopher Powell (d. 1742).