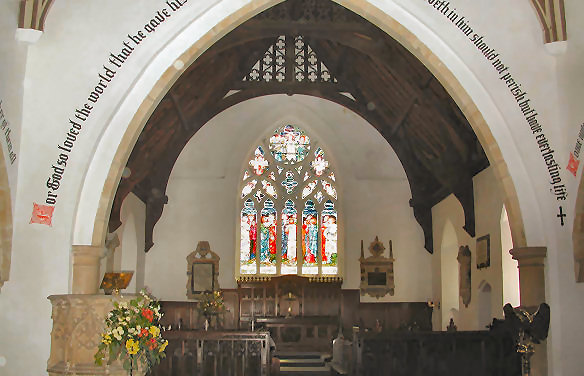 All Saints is an interesting church standing in a beautifully kept churchyard. The crownpost roof incorporates a canopy of honour over the eastern bay, where it would have emphasised the position of the rood figures. The lower part of the rood screen survives and is dated 1536 - making it (with Lullingstone) one of the last to be built in Kent before the Reformation. The sedilia and piscina survive in the chancel and date from the fourteenth century, even though this part of the church was rebuilt in the nineteenth century. The east window is by Morris and Co., and dates from 1910, whilst the windows to north and south of the sanctuary are also of twentieth century date and are by the well known artist Robert Anning Bell who is not usually associated with stained glass. There is a fine memorial in the north transept to Barbara and Walter Roberts, showing the two figures holding hands. It dates from 1652. One of the bells in the tower carries the inscription, 'Untouched I am a silent thing, But strike me and I sweetly sing.'