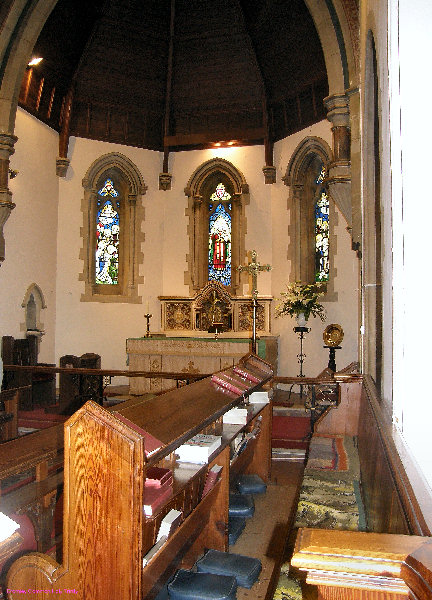 This prominent church opposite the pond at the south end of Bromley Common is of particular interest. Tradition says its was built by local landowner Mr Norman when challenged to do so by Queen Victoria. That apart, it is architecturally important as marking the two distinct nineteenth century traditions. When originally built to the designs of Thomas Hopper (1939) it was a cruciform church with the eastern arm being formed of a tiny chancel - just enough room to hold the Holy Table. Its simple Y tracery with clear glass is typical of this pre-ecclesiological period. Forty years later, when ecclesiological influences dictated that `correct` gothic should be used, the church was altered. Many windows were replaced with medieval style tracery, which was then filled with stained glass - though the ones that were left are of great importance to show the difference! Many of the windows are by Clayton and Bell. Pemberton Leach enlarged the tiny chancel to the best of his ability. In practice this meant adding an apse. No doubt he would have liked to have widened the space, but this would have meant demolishing the eastern walls of the transepts, and was deemed impractical. The chancel contains a fine Crimean monument by Gaffin of London to a member of the Norman family. It shows two mourning soldiers standing either side of a representation of the memorial. All in all this is a much more interesting church than first appearance would lead one to believe.