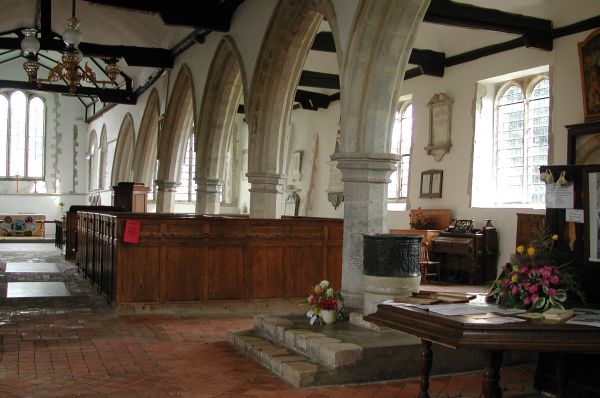 A long low church with the most famous spire in Kent. This three-stage 'candle-snuffer' erection which stand son the ground instead of on a tower is the result of several enlargements of a thirteenth-century bell cage and its subsequent weatherproofing with cedar shingles. It contains a peal of six bells, the oldest of which is mid-fifteenth century in date. The spire is surmounted by a winged dragon weathervane, dating from 1797. The monster has a prominent forked tongue. The reason for the bells being hung in a cage rather than a tower is shown inside the church where the pillars of the nave have sunk into the soft ground and splayed out to north and south. The tie-beams of the roof came away from the walls and have had to be lengthened by the addition of new timber supports. The outstanding Norman font in cast lead has been fully described in Part 1. To the south of the church is a headstone incorporating the only 'Harmer Plaque' in Kent - a terracotta panel made in East Sussex where they are a common feature.