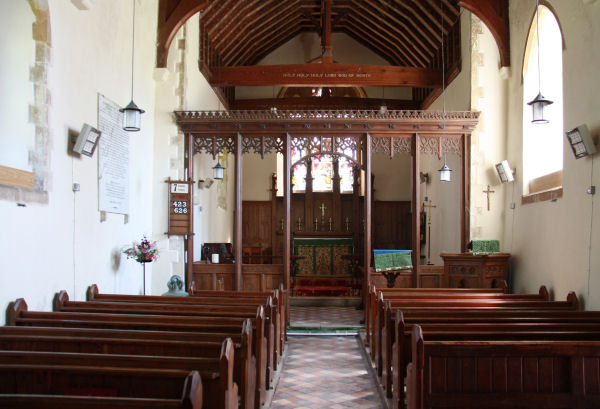 The south doorway is Burmarsh's claim to fame. It is good late twelfth-century carving with a roll moulded arch surmounted by triple chevrons and billets. In the centre of the billets is a large carved human head - of a man who, from his expression, is suffering from toothache! The doorway is in its original position, although in Tudor times a new smaller doorway was inserted within the same frame, just below the capitals of the original. Another Norman feature to be seen is the window in the north chancel wall, its head cut from a single piece of stone. There is a pretty twentieth-century chancel screen and paintings on the chancel ceiling executed by a former rector. The Royal Arms are those of George III and are signed as the work of J. Marten whose work may also be seen at Staplehurst and Hinxhill. Two mass dials survive on the SW buttress of the tower which dates from the fourteenth century