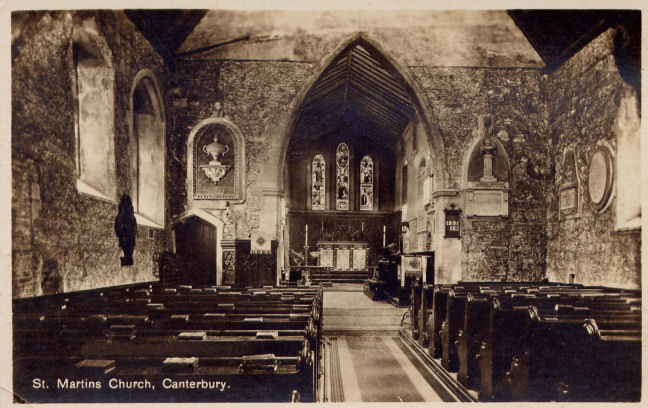 Historically, this is the most important church in Kent. St Martin's is the building in which Queen Bertha and St Augustine worshipped together in the closing years of the sixth century, making it the oldest parish church in England that is still in use. Furthermore it is built of large quantities of Roman tile mixed with local flint and ragstone. The exterior shows typical Saxon buttresses and long and short work, but there are no Saxon window openings still in use. However, the west wall inside has been stripped of plaster which allows us to see very early blocked windows. Apart from the great age of the walls there is little of visual interest - with a fourteenth-century tower at the west end and a rather severe atmosphere resulting from the drastic nineteenth-century restoration that saw the insertion of dreadful 'catalogue' stained glass. Were it not for the early history of this church the font would be its outstanding feature. It is of Norman date and is carved from a large block of Caen stone. Tall, solid, and eminently decorative it has intersecting circlets in two lower levels, and arcading of Romanesque arches above, topped by a rim of rolling swags. As a complete contrast to these earl treasures the churchyard contains the grave of Mary Tourtel, creator of Rupert Bear