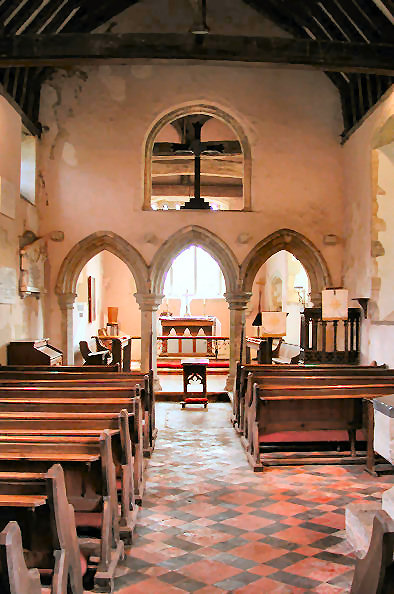 Standing in a windswept setting at the confluence of many footpaths, St Mary's church was long ago abandoned in favour of a modern church more centrally located to the straggling village outside Folkestone. The church is of Norman origins, but its present character dates from the late thirteenth/early fourteenth century. Its outstanding feature is a triple-arched chancel screen with an arched opening above in which once stood the Rood. This was not the rood screen in itself, for the capitals of the triple arcade cut to take the more conventional wooden screen. It has recently been argued that a western window originally threw light onto the rood figures prior to the construction of the present tower. To the north of the screen is a fine window, higher than others in the church, which may well have served the same purpose following the addition of the tower in the fourteenth century. For a small church, St Mary's contains two very good nineteenth century stained glass windows, and a notable mural tablet with military insignia. The church is in the care of The Churches Conservation Trust. Keyholder nearby West tower, nave, chancel, south porch