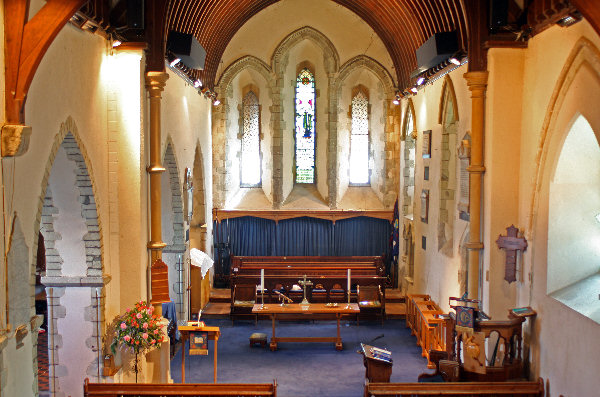 A rather incongruous porch slaps up to the fifteenth-century west tower that acts as a landmark on the former A2 London-Dover road. The church is Norman in origin, but much rebuilt. In the twelfth century a north aisle was added and the arcade from the nave shows the typical simple pointed arches that were cut through the existing wall. A hundred years later a south aisle was built, but this was demolished in 1759. The circular pillars that supported this arcade, as opposed to the rectangular piers opposite, may be clearly seen both inside and out and add much to the character of the church. The east window is a group of three thirteenth century lancets, although they are much restored. In the south wall of the chancel is a good example of a thirteenth-century low side window, whilst in the north chapel are two tomb recesses of fourteenth-century date. On the wall of the north aisle are two lead plates that formed part of an earlier tower roof. These show the outlines of footprints. At the west end of the church, and partly under the tower is a gallery erected in 1992 in response to increased church attendance. Charles Dickens (who lived in nearby Higham) worshipped in this church and would raise his hat to the jolly monk whose carving may still be seen over the west doorway!