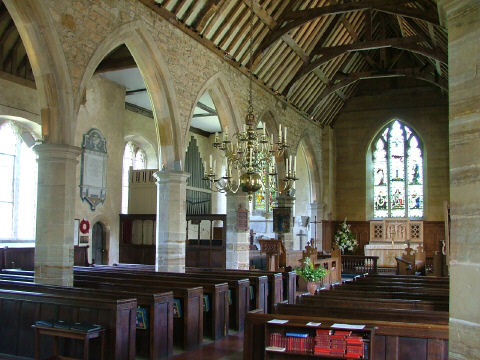 St Mary's church is built of local sandstone, although it is not quite as mellow as we see at neighbouring Leigh and Penshurst. In the churchyard is a fine mausoleum built in 1736 by Henry Streatfeild leading down into a large family vault ingeniously ventilated by a current of air that enters from the side of a false altar tomb nearby. Inside, the church is almost rectangular, emphasised by the wooden panelling and benches which run round the walls in a most unusual fashion. It was common in the Middle Ages to have stone benches along the walls for the elderly and infirm, but these wooden seats are of much later late. The internal walls of the nave are not rendered, which tends to darken the building, but at the east end of the church, in the north chapel, are some very fine masons' marks. Also in this chapel is a five-light window containing two lights of stained glass dated 1871. It was intended to portray the Last Supper across the whole window but money must have run out before it was even half-finished!