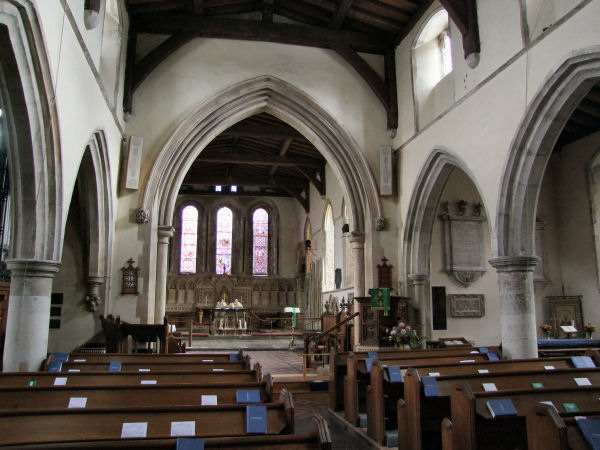 In a county with more memorial brasses than any other, Cobham takes pride of place, with a set of nineteen, the majority of which have been grouped together in the chancel. The church consists of a thirteenth-century chancel, and fourteenth-century nave, aisles and west tower. In 1362 the church was refounded as a college by Sir John de Cobham, and the medieval domestic buildings survive to the south of the church. The south wall of the chancel displays several items of interest. There is a fine double piscina which has been moved further west of its original position. The latter is now occupied by an elaborate fourteenth-century piscina, with a finely wrought canopy of three arches and a parapet of quatrefoils and leaves. Next to it is a slightly plainer sedilia of three equal arches. The last feature of note is the stairway in the south-east corner of the chancel which led to a gallery over the altar - a unique feature in Kent. In the centre of the chancel is the alabaster table tomb of Sir George Brooke (d. 1558). It was badly damaged when a beam fell on it in the eighteenth century and is much restored. In front of the monument are sixteen of the medieval brasses, brought here from other parts of the church, the most interesting of which are: Sir John de Cobham (d. 1407), founder of the college, who is seen holding a lovely spired church in his hands; Sir Nicholas Hawkberk (d. 1407) - a super visor hinges from his face; William Tanner (d. 1418) the first master of the collegiate foundation. Visit the church's own website here.