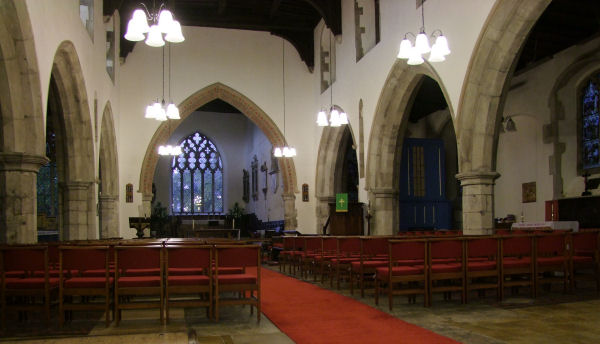 An impressive church, though this is not the impression one gains when approaching it from the west, where the tower is almost all that is visible. Norman in origin, but much enlarged in the thirteenth and fourteenth centuries and remodelled in the fifteenth, St James has had a bush or two with Anglo Catholic practice which has resulted in the introduction of some fine furnishings. Pride of place must go to the Lady Chapel altar by Sir Ninian Comper, one of three to be found in this part of the Medway Valley. Also commemorated here are members of the Twisden family, whose house Bradbourne, stands north of the church. Until the 1930s the chancel was privately maintained by the family and retained its box pews until the death of the last Baronet when this part of the church was restored to its pre-Reformation form. In its floor is a slab to Col Tomlinson, who guarded King Charles I until his execution in 1649. He was related by marriage to the Twisdens. The organ at the west end of the church was formerly in Bradbourne House and was donated to the church in 1934. Nave, north and south aisles, chancel and west tower.