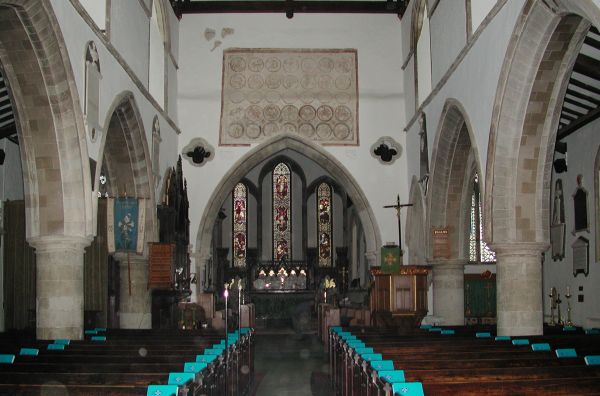 Set away from the main street but on one of the earliest sites in the village, flint-built Eastry church has an over restored appearance externally but this gives way to a noteworthy interior. Built in the early thirteenth century by its patrons, Christ Church Canterbury, it was always designed to be a statement of both faith and power. The nave has a clerestory above round piers whilst the east nave wall has a pair of quatrefoils pierced through into the chancel. However this feature pales into insignificance when one sees what stands between them - a square panel containing 35 round paintings in medallions. There are four deigns including the Lily for Our Lady; a dove; Lion; Griffin. They would have formed a backdrop to the Rood which would have been supported on a beam the corbels of which survive below the paintings. On the centre pier of the south aisle is a very rare feature - a beautifully inscribed perpetual calendar or `Dominical Circle` to help find the Dominical letter of the year. Dating from the fourteenth century it divides the calendar into a sequence of 28 years. The reredos is an alabaster structure dating from the Edwardian period - a rather out of place object in a church of this form, but a good piece of work in its own right. On the west wall is a good early 19th century Royal Arms with hatchments on either side and there are many good monuments both ledger slabs and hanging tablets. Of the latter the finest commemorates John Harvey who died in 1794. It shows his ship the Brunswick fighting with all guns blazing with the French ship the Vengeur. John Bacon carved the Elder this detailed piece of work.