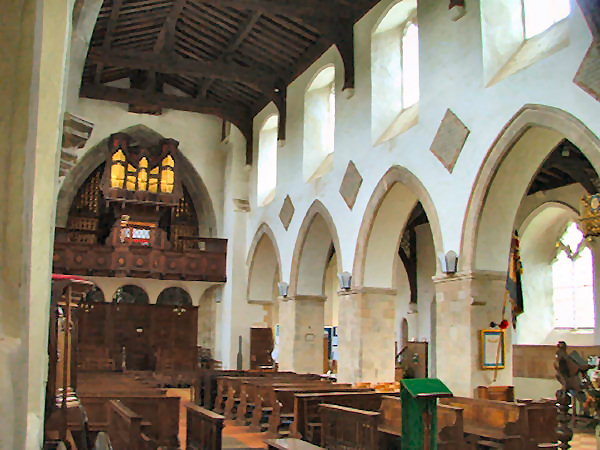 The church stands in the village square removed from the main road. The flint rubble construction and severe restoration of the exterior does not look welcoming, but the interior is most appealing with plenty of light flooding through the clerestory windows. The rectangular piers of both north and south arcades with their pointed arches and boldly carved stops are of late twelfth-century date. Between them hang some eighteenth-century text boards. The character of the church is given in the main by late nineteenth- and early twentieth-century work. The high altar has four charmingly painted panels by John Ripley Wilmer in Pre-Raphaelite style, executed in 1907. At the opposite end of the church are the organ loft, font cover and baptistry, all designed by F.C. Eden, who restored the church in the early 1900s. He also designed the west window of the south aisle as part of a larger scheme which was not completed. In the south chancel wall are two windows of great curiosity. One contains a fifteenth-century figure of St Thomas Becket while the other shows figures of David and Saul. This dates from the nineteenth century and was painted by Frank Wodehouse who was the then vicar's brother. The face of David was based on that of Mme Carlotta Patti, the opera singer, while Gladstone and Disraeli can be identified hovering in the background! It is a shame that it has deteriorated badly.

All information contained on this website is the intellectual property of John Vigar © 2023.