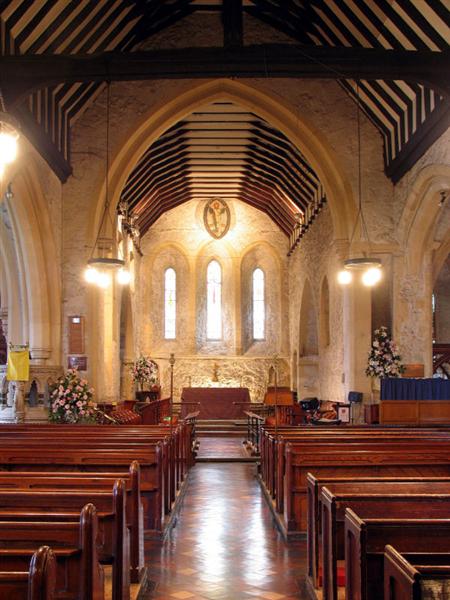 A knockout church surrounded by industrial estates and high density housing yet only a stone's throw from the Thames. A confusing, originally Norman building, the pattern of development was further messed about with by Habershon and Pite who restored the church in the nineteenth century and who added the north aisle. Their greatest crime was to remove the wall plaster to reveal the bare stonework. The entrance to the Rood Loft staircase may still be seen. Outside the east end is amazing - with three thirteenth century lancets in the centre very much hemmed in by the Wheatley Chapel on the south and the Vestry to the north. The east window by Francis Spear represents the Passion. Under the depiction of St Luke is a scene of the factories in Erith at the time whilst the other lancet has the church and vicarage in the base! In the vestry medieval tiles removed from the floor during the restoration have been fixed to the walls some of them are from the ruins of Lesnes Abbey a little distance away. From the Norman period are some delightful corbels with monster's faces - though they may be complete replacements or rather re-cut. The Wheatley Chapel, on the south side of the chancel, contains some important memorials including a tomb chest to the Countess of Shrewsbury. There are also many brasses including one to a man who was steward to the Abbot of Lesnes in the early fifteenth century. The monument to Lord Eardley in the north aisle, showing a distressed woman, is signed by Chantrey and is an unexpected gem.