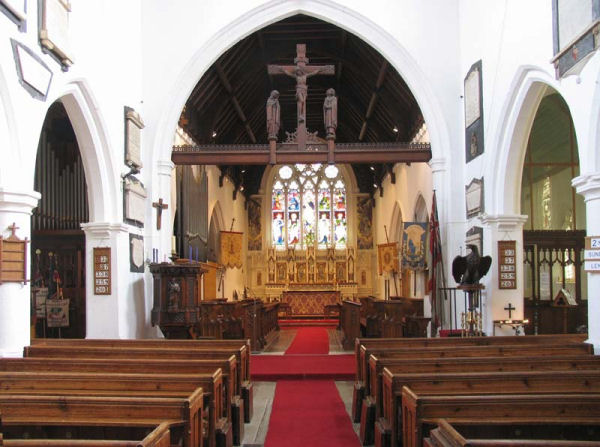 Gillingham Green is almost unknown to people of the Medway towns who associate this area with the shops of the High Street and the conurbation linking the town and the former Roman Watling Street. Yet here is an oasis of clam, with a few Georgian houses and a magnificent medieval church of west tower, aisled nave with chapels and chancel. The tower has noticeable putlog holes left when the scaffolding used in its construction was removed. The fourteenth century chancel arch is adorned with a twentieth century rood beam with figures whilst most furnishings are uncompromisingly Victorian. Stained glass abounds and particularly good is the east window of 1869 by the firm of Heaton, Butler and Bayne to mark the completion of the restoration of this church by Blomfield. The Norman font is an extravagant piece of work with a fine seventeenth century cover.