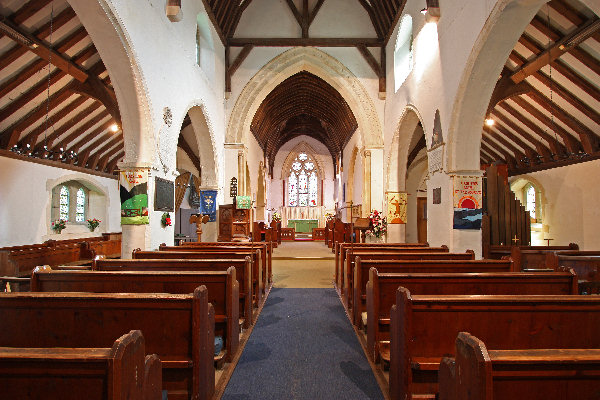 Hidden away from the road that rushes through the village, this is a tour de force of thirteenth century architecture. Narrow piers lead to aisles cut from the Norman church. At the west end is a small glass panel of SS Peter and Paul – opinion is divided about its age, but I feel that it is probably 17th or 18th century German. Its setting by Powell’s is delightful. The church was restored by William Butterfield and much of the interior is his – the pulpit, north and south chancel walls, choir stalls, altar rails and tiles. As an ensemble it is one of the finest in Kent and at the present time (Autumn 2008) is threatened with drastic reordering. Butterfield`s chancel screen has already disappeared, together with its highly-praised wrought iron gates. In the north chapel is a standard early 17th century prie-Dieu monument. However, on the outer wall of the tower is a memorial to Robert Maynard the man who captured Blackbeard the pirate in Carolina. Surprisingly the monument does not mention what was undoubtedly his greatest hour! That’s Life!