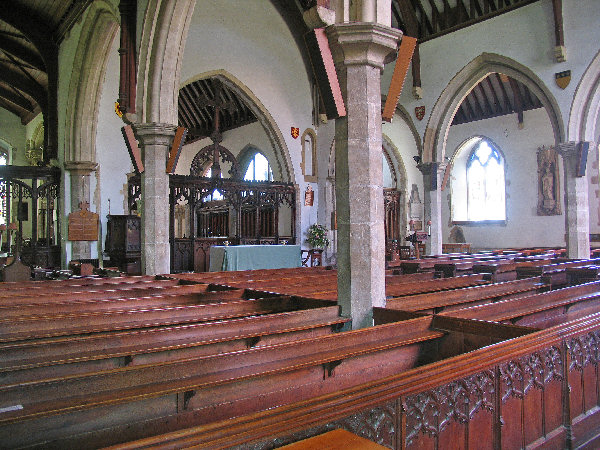 A large, impressive and relatively little-known building of fourteenth-century date. Although nineteenth-century restorations have left us with a church that displays little patina it still contains much of interest. The chancel screen dates from 1872 and provides good comparison with the fourteenth-century screen of the north chapel which, unusually, has two east windows. The sedilia in the chancel take the form of a series of three multi-cusped arches descending to the west - although the Victorian floor level makes a nonsense of their height. The nearby piscina is fifteenth century. The east window and theatrical reredos are nineteenth century and form an impressive ensemble. There are some fine misericords incorporated into the Victorian stalls. On the north chancel wall is a good Easter Sepulchre - the memorial of Sir John Fyneux (d. 1525). The north chapel was a chantry foundation with its own priest and is connected to the chancel by a two-bay arcade and hagioscope. The rood loft stairway to the south of the chancel arch indicates that the screen did not run the full width of the church and that each of the chapel screens formed a separate construction.