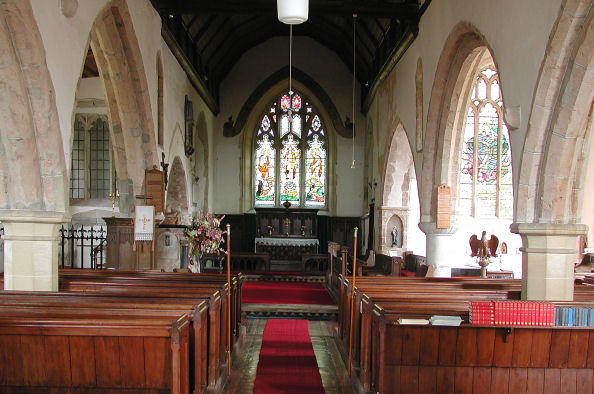 Substantially rebuilt after a fire of 1598. The welcoming interior displays no chancel arch, although the doorways in the arcade show where the medieval rood screen ran the width of the church. The striking east window was designed by Wallace Wood in 1954. There is a good aumbry and piscina nearby. To the north of the chancel stands the excellent tomb chest of Sir John Tufton (d. 1624). The arcade into which it is built was lowered to allow a semi-circular alabaster ceiling to be inserted to set the composition off. Because it is completely free-standing it is one of the easiest tomb chests in Kent to study, with five sons kneeling on the south side and four daughters on the north . In addition there are complicated coats of arms and an inscription which records the rebuilding of the church by Tufton after the fire. On top of the chest lie Sir John and his wife, with their son Nicholas kneeling between their heads. Much of the monument is still covered with its original paint. The organ, which stands in the south aisle, may be the instrument on which Sir Arthur Sullivan composed 'The Lost Chord'. It originally stood in Hothfield Place where Sullivan was a frequent guest.