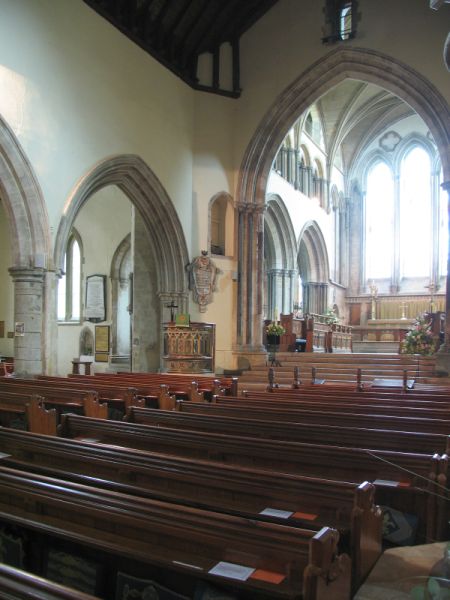 A large civic church, as befits one of the original Cinque Ports. Traces of the Norman building may still be seen in the blocked round-headed windows in the north wall of the nave and the excellent Norman arch at the east end of the south aisle. The chancel is thirteenth century in origin, completed by Pearson in 1886. The pulpit is a great piece of Victorian craftsmanship, designed by George Edmund Street in 1876. The three-light stained glass in the east window is by Wallace Wood and dates from 1951. There are Royal Arms of the reign of William and Mary. The chancel has a triforium gallery, an unexpected find in a parish church. A circular staircase runs from the north-west corner linking the triforium, rood loft and roof. Under the chancel is an interesting processional passage, open to the public during the summer, which contains hundreds of skulls collected from the churchyard during clearances. In the churchyard is the grave of Lionel Lukin, who obtained a patent for his invention - the lifeboat - in 1785.