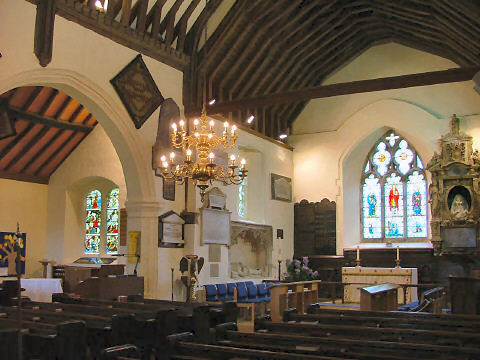 The church is built on a steep hillside and displays a rare brick-built north aisle. The chancel is full of unusual memorials, the most noteworthy of which is to Sir Thomas Cawne dating from the end of the fourteenth century. He is wearing armour and chain mail and lies under a canopy beneath a window that forms part of the same composition. In the churchyard is a nice nineteenth-century tomb designed by the famous architect William Burges. The other monuments of note at Ightham are all to the Selby family, the most famous of whom is Dorothy Selby (d. 1641) who is reputed to have had a connection with the Gunpower Plot, although the ambiguous inscription on her tomb is now believed to be no more than an appreciation of her needlework.