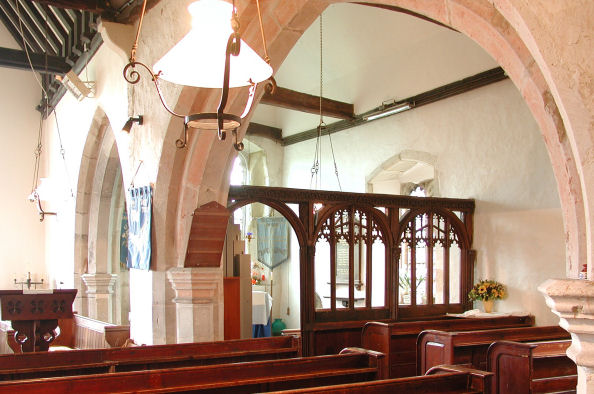 Tower, nave, south aisle and chancel hug the slope overlooking the estuary of the River Swale. The tower has clear putlog holes - created when the constructional scaffolding was removed. Several of them have been converted into little windows. The south door is medieval with its original handle of two winged lizards. Also medieval is the rood screen, now to be found in the south aisle. The east window of the south chapel is a good quality late medieval representation of the Crucifixion, although parts of it may be nineteenth-century replacements. The nave roof has been plastered to cut down on draughts, leaving the crownposts to sail into nothingness although when Ewan Christian restored the chancel in the 1870s he removed the plaster from that part of the church. The Royal Arms are of George III and there is a sixteenth-century piscina in the chancel.