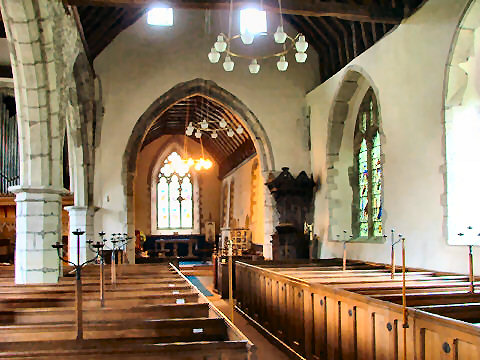 A village centre setting where the church is approached from the north. This side shows ragstone and flint construction. Although the building contains work of earlier periods it is on the whole a fourteenth-century structure. The memorable feature is the size of the internal door which fills the tower arch - although it is not as old as it at first appears. On the south wall of the nave is a faded mural of St Michael. The pulpit is Elizabethan with a slightly later tester that carries the date 1622. Next to the pulpit is a good window in the style of Kempe, signed in the inscription with the `greyhound` symbol of H.W. Bryans who set up his own studio in competition. The other glass is mid-nineteenth century and of poor quality. The lectern, of wood, with nicely carved feet, may be as early as the fourteenth century, and has a crude and rural feel about it. The medieval stalls, which are returned along the west side of the chancel arch, are much restored. On the north wall of the chancel is an extremely strange monument which shows a fourteenth-century priest lying obliquely in two halves! The Royal Arms over the north door date from the reign of Queen Anne.