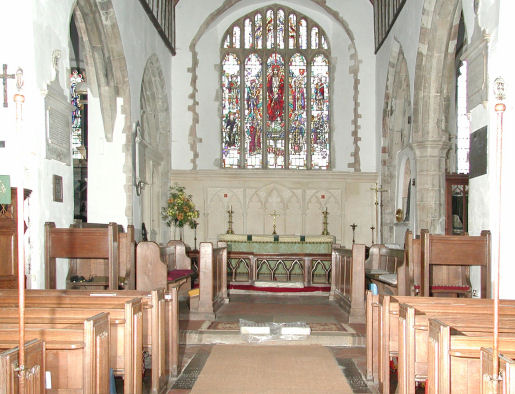 The church stands close to the road in a dark and sombre churchyard. Inside, the chancel arch is unusual in that the capitals have been cut off to facilitate the construction of the rood loft. The interesting east window of five lights has a very closely set grouping of openings under the canopy. There are two chapels - the north belonging to the Hugessons and the south to the Teynhams. They both contain excellent monuments. The most important commemorates Lord Teynham (d. 1622) and is signed by Epiphanius Evesham. It shows Lord Teynham lying on his back with his widow kneeling under an arch behind him. At the base are relief carvings of their children. The sons have just returned from hunting and the daughters are crying - two of them have little dogs. Opposite this monument is another to his father who died in 1618, altogether it forms a more ordinary composition.