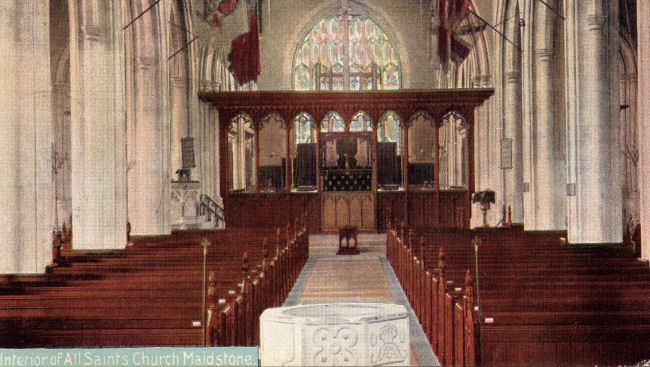 One of the widest churches in Kent, dating from the late fourteenth century when it was granted a College of Canons whose buildings still exist nearby. The tower, which stands to the south of the nave, originally had a tall spire, but this was struck by lightning in 1730 and not replaced. The breathtaking scale of the interior - an aisled nave of six bays, chancel and chapels, is somewhat compromised by the severe wooden roofs inserted by John Loughborough Pearson who restored the church in 1886. A good set of Victorian stained glass includes work by Clayton and Bell, Wailes (1861) and Capronnier (1872). The twenty stalls have excellent misericords, mostly showing coats of arms of those associated with the college. Archbishop William Courtenay (d. 1396) is possibly buried in the chancel, and a brass indent to him survives. Set into the fine sedilia is the tomb of John Wotton (d. 1417), the first master of the college. It incorporates a painting of Wotton being presented to Our Lady. Nearby are graffiti associated with the game of noughts and crosses! There are many other monuments including one to John Astley (d. 1639) by court sculptor Edward Marshall. It depicts two men and women in their shrouds. Astley was Master of the Revels to King James and King Charles. There is also a memorial to Sir Charles Booth (d. 1795) signed by Nollekens.