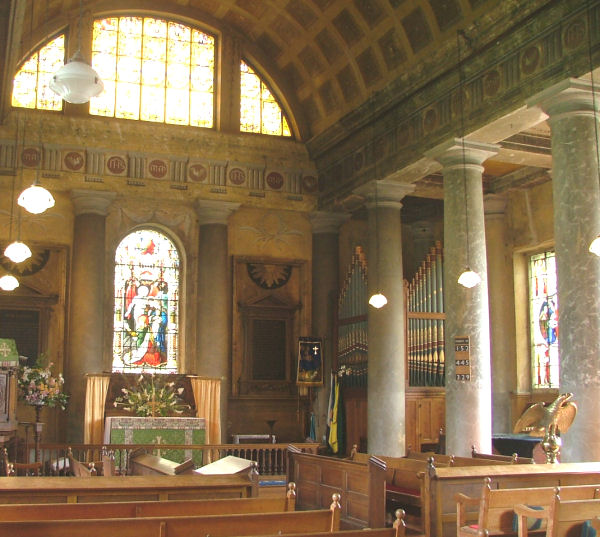 One of the few eighteenth-century churches in Kent, built in 1746 by the 7th Earl of Westmoreland. Surprisingly for so late a date the name of the architect is not known although it is in the style of Colen Campbell who designed the nearby castle, but as he died in 1722 it is probably by someone in his office. The main feature of the church is a tall stone steeple with four urns at the top of the tower, whilst the body of the church is a plain rectangular box consisting of an aisled nave and chancel. Inside is an excellent display of eighteenth-century interior decoration - especially fine being the curved ceiling which is painted with trompe l'oeil panels. At the west end is the galleried pew belonging to the owners of Mereworth Castle - it has organ pipes painted on its rear wall. The south-west chapel contains memorials brought here from the old church which stood near the castle, including one to a fifteenth-century Lord Bergavenny, and Sir Thomas Fane (d. 1589). The latter monument has a superb top-knot! The church contains much heraldic stained glass of sixteenth-century date, best seen with binoculars early in the morning. Of Victorian date is the excellent Raising of Lazarus window, installed in 1889 by the firm of Heaton, Butler and Bayne. In the churchyard is the grave of Charles Lucas, the first man to be awarded the Victoria Cross, while serving on the Hecla during the Crimean War.