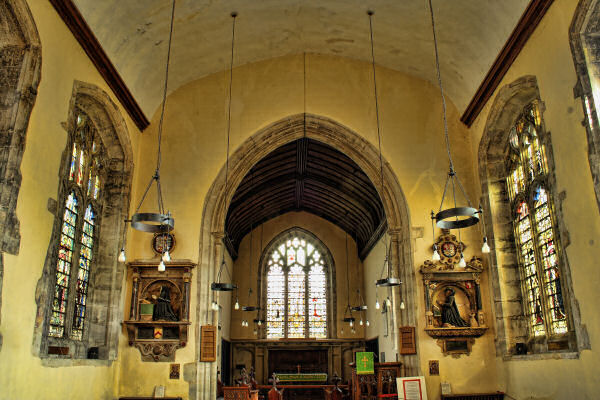 Tucked away down a straight path, to the north of Nettlestead Place and west of the River Medway, this small church is intriguing and full of character. The oldest part of the church is the tower, dating from the thirteenth century. This is now attached to a church completely rebuilt in the first half of the fifteenth century by the Pympe family, great supporters of the Woodville family and tenants of threw Dukes of Buckingham. The reason why everyone should visit the church is to see the contemporary glass installed in the huge Perpendicular windows which march down the nave. The Pympes arms may be seen, as well as those of their overlords and other families with whom they were associated. Reginald Pympe (1448-1530) was seen as a threat to Richard III but he lived to enjoy happy times in the reign of Henry VII. What was broken at the Reformation was skilfully restored and augmented by Ward and Hughes in the early 20th century. There are two lovely monuments on the east wall of the nave - to Katherine and Elizabeth Scott, one 16th and one 17th century.