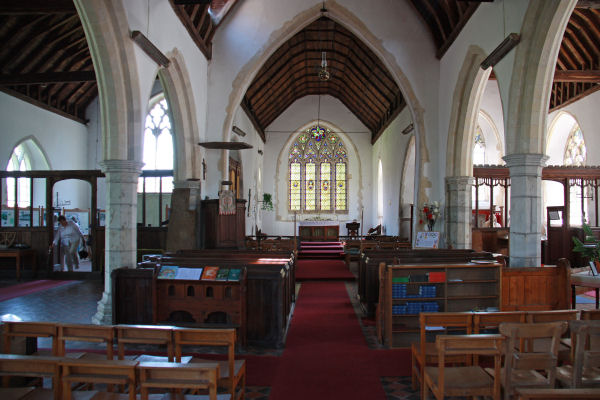 Not one of the most memorable churches on the Marsh, but still beautiful in its over-restored state. The church today dates from the thirteenth and fourteenth centuries, but its name implies that there had been an earlier building here. The interior is more pleasing than the exterior, the finest single feature being the octagonal font which dates from the fifteenth century and incorporates the roses of Lancaster and York and the symbols of the patron saints, Sts Peter and Paul. Both chapels have medieval screens and there are well-defined rood loft openings. The ogee-headed piscina in the south chapel and the aumbry are typical of the fourteenth century. It is a pity that the nineteenth-century floor tiles are such a visual intrusion. The arcades of the nave should be contrasted with the thirteenth-century cut-through arches between chancel and chapels. The west tower - not tall as many fourteenth-century structures go because of the marshy ground - leans to the west and is heavily buttressed. The shrinkage of the peat following drainage of the marshes for sheep grazing was to blame.