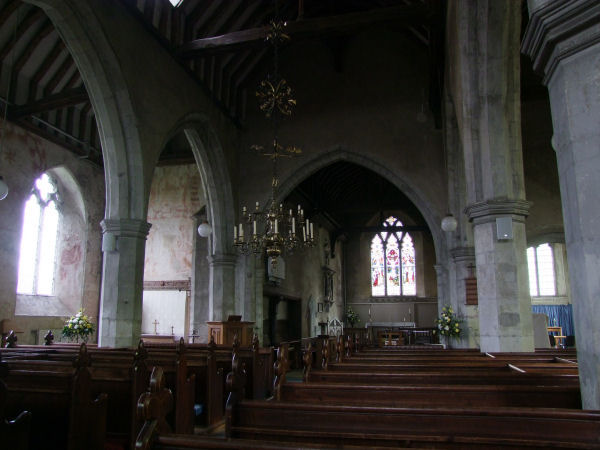 A hugely interesting and curiously little known church, although to those familiar with its location it is `the church in the orchards`. Starting life in the Norman period - a delightful capital survives in the south aisle - it was much extended in the thirteenth to fifteenth centuries. The latter is represented by the west tower which shows the familiar local peculiarity of banded flint and ragstone (see also Higham and Cliffe). Inside the enormous church one is struck by the amazing amount of medieval wall painting that survives including a huge doom on the east wall of the north aisle and a rather special Christ in Majesty in a niche in the south aisle. The octagonal font has a spectacular wooden cover dating in the main from the seventeenth century. In the north aisle chapel is a brass which (unusually) commemorates two seemingly unrelated men of the fifteenth century, whilst in the centre of the chancel is an Elizabethan brass showing an affectionate mother - a very rare find. The south chapel contains what purports to be the shrine of St Robert of Newington, the village's own saint. There is no doubt that it is medieval but how it survived the Reformation if it was regarded as a shrine, and just who St Robert was will continue to be a mystery.