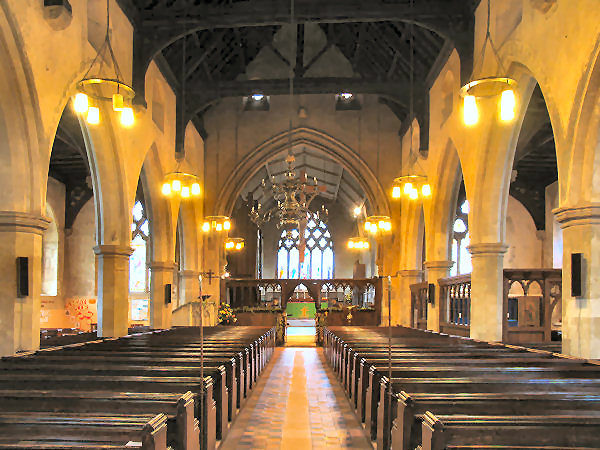 An absolute knockout of a church, little visited and deserving of more interest. The church is enormous and stands in a large and somewhat bleak churchyard. Attached to the church is a modern church centre which ensures a necessary income to maintain such a whopping building. At the junction of the west tower and south aisle the casual visitor can see unmistakable long-and-short work of the original Saxon church, although the rest of the external features have nearly all been renewed away by nineteenth century restorations. Inside, the rood screen is one of the earliest left in situ in Kent although it has been much mutilated. The metal gates are a nineteenth century addition! Above it is a hanging rood of twentieth century date. Filling the tower arch at the west end of the nave is a most remarkable painting by NJH Westlake showing Our Lady. The windows in this church are of the highest quality Victorian glass, many by the firm of Lavers, Barraud and Westlake (same as the artist mentioned previously) who worked here from 1872 to 1876. There are also windows by Warrington whose work is always worth a look and it is interesting to see the different approaches of the two firms. In the chancel is one of the earliest memorial brasses in the county to a priest, Peter de Lacey who died in 1375. During the nineteenth century the parish was rocked by a scandal when several members of the congregation objected to the High Church practices of the Vicar Fr Southgate, and when you see the works that he introduced it is obvious that in some respect their complaints were justified Even less excusable was the fact that the Vicar was (illegally) charging for pews as late as 1874, possibly to finance some of the furnishings we see today!