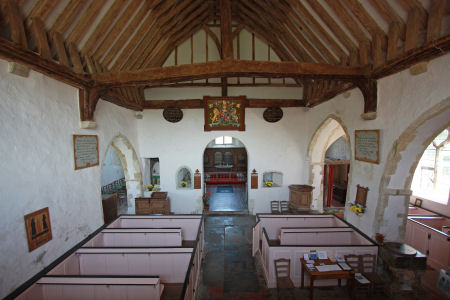 One of the most-visited Marsh churches, built on an artificial mound to protect it from the floodwaters. There is a Norman nave enlarged by the addition of aisles in the thirteenth century. Because of its virtually unrestored state it has many items of interest, the uneven floor creating a very rural atmosphere. The two hagioscopes to either side of the chancel arch are unusually large and little more than holes knocked into the wall. The rood loft staircase discovered in the 1920s still has its medieval door-frame - a rare survival indeed. In the north chapel is the mensa of the medieval altar. The delightful altar rails are early eighteenth century and present a run of very close-set balusters. The box pews and gallery are, of later eighteenth-century date and were repainted for the Rank film, Dr Syn. The large Royal Arms of George III are dated 1800 - the lion has a particularly smug expression! An interesting and unusual sight is the font, the capitals of which are carved with different figures. They date from the fourteenth century, and are much worn, but with patience one can still pick out details of the grotesque animals. The twentieth century film-producer Derek Jarman is buried in the churchyard and is commemorated by a headstone simply bearing his signature.