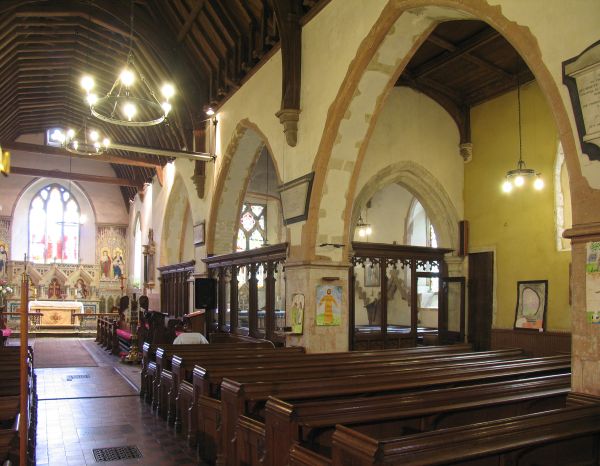 A pretty church whose thirteenth century origins seem lost beneath a Victorian veneer – yet inside all become clear. The north wall is thickened to take the rood loft staircase (see also Challock) but there is a medieval stair in the south side too, just to confuse. The font is a lovely twelfth century piece supported by the familiar five columns. Much of the glass is by Thomas Willement and displays his signature TW, which can also be seen in the Alpha emblem in the top of the striking east window. The chancel is a riot of Victoriana of grand design – constructed in several campaigns, the reredos and flooring definitely by different hands. Old photos show that the whole church was once stencilled, but now that the nave is relatively plain, the chancel is once more the focus of attention. The south chapel has a rather nice 19th century roof structure and must once have been a grand family chapel. All in all a lovely church full of interest and one which should be more accessible and better known.