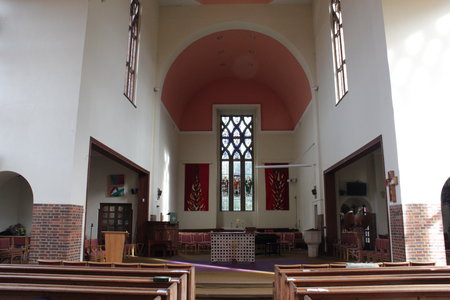 Paddock Wood is a railway town. These not only tended to grow quickly, they also encouraged the construction of large estates within a short drive. It was inevitable that a church would be needed, within the existing parish of Brenchley, and this was opened in 1851. A simple (crazy-paving) ragstone two-cell church, with a large nave and relatively small chancel was erected and dedicated to St Andrew. But this is not the church we see today. On the night of 4th November 1940 a bomb - one of 15 to hit the village, hit the church. In 1953 the foundation stone for a new church, to be built to the design of Mr Cecil Burns, was laid. Corbens of Maidstone were the contractors. Ragstone from the old church formed the foundations and base with brick above. The most noteworthy feature of the church is the rose window at the west end - striking both inside and out. The glass was designed by Joan Howson in memory of John Brunt VC MC. The church is cruciform with a central altar - salvaged from the old church - full of light but rather Byzantine for Kent. The exposed brick at low levels is rather of reminder if 1930s suburban architecture, but it grows on you!