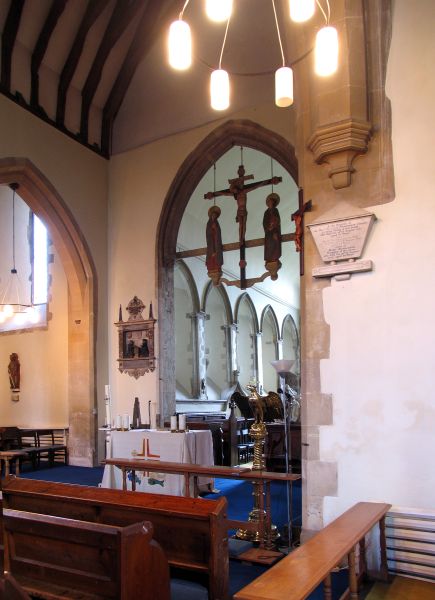 Not so interesting from the outside, St Catherine’s really is a connoisseur’s church internally. The north aisle is entirely Victorian whilst the south aisle is a Victorian rebuild of a Norman structure. The rood loft staircase survives within the south wall of the crossing. The chancel was built early in the thirteenth century, and even though its east window is Victorian it still shows the wealth of the medieval masons. The sedilia, of three seats, is a riot of carving – look at all the little heads poking out here and there against a richly carved background. The finials are definitely Victorian but much of the medieval carving has been renewed. Be that as it may the whole ensemble is a joy to behold. Opposite is a huge 17th century monument to the parents of the 1st Earl of Cork. It shows alabaster carving of great skill, and the whole monument has an unusual composition. One only wishes that the English altar did not encroach upon it so much! The altar is 20th century and is one of a noble set of fittings of that period which have done much to improve the appearance of the church.