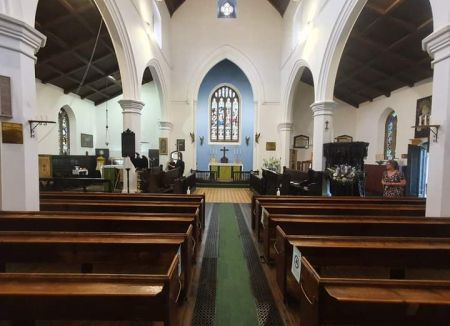 The church of the Holy Trinity, Ramsgate, is located in a prominent position on the town's East Cliff, a short walk away from the historic Royal Harbour. It sits atop a mound overlooking an open space known as as Arklow Square, overlooking several large Victorian-era seaside houses, now converted into apartments. The land was provided by royal patronage; donated by the Baroness Truro, Augusta Emma Wilde (née D'Este), a granddaughter of King George III through his sixth son, Prince August Frederick, Duke of Sussex. Baroness Truro lived locally at Mount Albion House. The church was built between 1844-45 although there are some discrepancies over the identity of the architect. Most sources list the London based partnership of Stevens and Alexander (John Hargrave Stevens and George Alexander) but the Parish Profile has listed Everard Henley as the source of the original designs. The total cost of the construction was £3,000. Either way, Holy Trinity is an imposing Gothic building made with the use of locally sourced flint with Bath or Caen stone dressings. It is an almost beautifully symmetrical design, originally consisting of a large clerestoried nave with parallel north and south aisles. (The church has a non-liturgal alignment, so the east window actually faces north). In keeping with church buildings of the early Victorian-era, following the late Georgian period, the chancel is tiny and is little more than an extension of the nave to house the altar and east window. There is a (liturgically*) south porch and a vestry alongside the *east wall. The building is topped by a small bellcote between the nave and chancel, in which hangs one bell. The interior of the church has been significantly altered since its consecration. In 1979 the Church Hall was built inside the building and now occupies space that was formerly the *western third of the nave. This means that the church can now host other community events in addition to religious services; and with a large hall and smaller meeting room, plus a large kitchen and toilet facilities, it is equipped for the demands of the 21st century. During the same period the chancel was redecorated and extended. There is now a polygonal platform surrounded by wooden altar rails bringing the sanctuary area closer to the congregation. The octagonal wooden pulpit is made of very dark wood and demonstrates carving of the highest quality. Dating from 1867-68, it was designed by J.E. Lock-Beveridge. The *east end of the *north aisle is used as the Lady Chapel. There is a small altar and tabernacle here, with a terracotta Della Robbia dating from 1927 on the wall behind the altar. This came from the Della Robbia workshops in Florence, Italy, and was given to the church by a Mrs Lancaster whose husband and son both drowned at sea. With Ramsgate having a maritime history, the perils of the sea are starkly highlighted on two 19th century memorials hanging on the walls of the *north and *south aisles, commemorating young men aged just 17 and 18 who lost their lives in seafaring tragedies in Australia and India. The War Memorial board is located in the porch, either side of a small stained glass *west window. The church has a good selection of impressive stained-glass, most notably the large Victorian main *east window and a modern piece at the *east end of the *south aisle; but one of the drawbacks of the partitioned Church Hall is that some of the stained-glass windows towards the rear of the building have unfortunately been obscured. Consequently there are images of saints looking down upon those who serve in the kitchen, and, somewhat uniquely - St. Matthew is looking down from the window in the gentlemen's toilet cubicle! For much of its history, Holy Trinity has maintained a vibrant Anglo-Catholic style of worship within the Church of England, and offers visitors a warm and friendly welcome. Text by Rob Baker